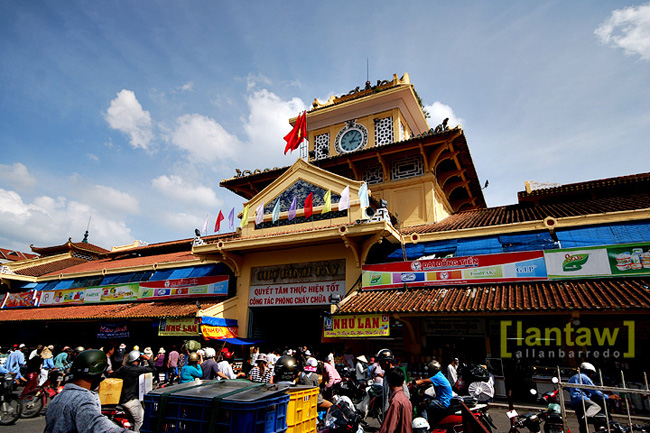 The gate of Binh Tay Market in District 5

The entrance to the Saigon Central Bus Station is located across the traffic roundabout at Ben Thanh Market.  The bus station has recently been upgraded which has included new signage and information and apparently some new buses.  One of the most important issues is to make sure that before getting on the bus you have some change for the bus.  The fare is VND5,000 and even a VND20,000 is too big.  The air-conditioned blue bus number 1 goes from the Central Bus Station directly to Cholon Bus Station which straddles districts 5 and 6.

The Market is at the end of the line and on arrival at Cholon the visitor descends into a midst of outlying stalls which surround the central undercover area of Cho Binh Tay (Binh Tay Market). The stalls are loaded with fresh produce. Colorful fruit, vegetables, spices and meat.  However, along other streets is a wide range of other merchandise which is very interesting to explore.  The whole area is frantic as volumes of small trucks and motor scooters, loaded with over-sized boxes, squeeze awkwardly through the narrow streets. 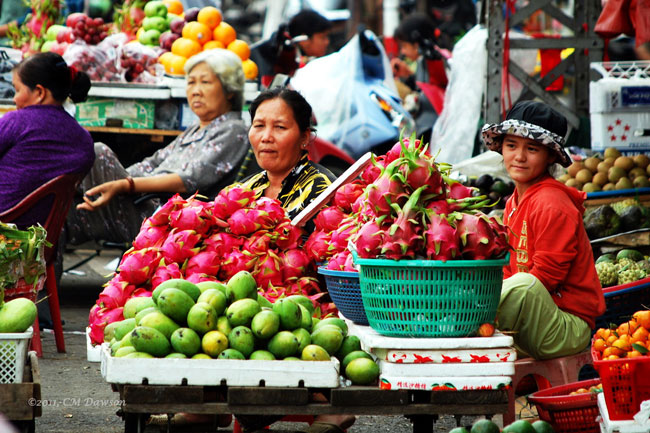 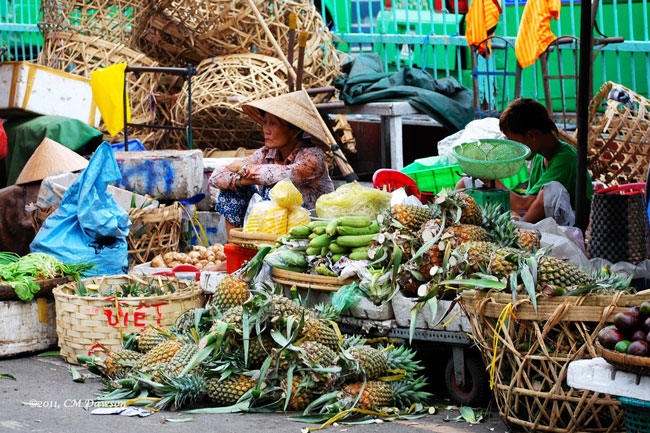 The crowded Binh Tay Market is the major attraction in the area and offers everything from fresh produce to locally made Vietnamese products and items depicting a Chinese background.  Binh Tay is a wholesale market and every stall is piled high with hundreds of similar articles all ready to be redistributed to retailers within the city.  Some vendors will sell to individual customers but there are a few that refuse, although this is unusual.  The prices here are much cheaper than at the very touristy Ben Thanh Market, note the array of hats, from the stylish race- going bonnet, to sunhats, panamas and caps.

There are piles and piles of coloured fabrics, helmets with amazing designs, although the quality may not pass any road worthiness test, pottery and clothing.  Then there are spices, seeds and food ingredients, the list is endless.  The market is crowded with small, narrow aisles and it is necessary to walk carefully to avoid men carrying large bags of stocks up and down.  This market is very historical and dates back decades, during the Vietnam War Cholon became a thriving black market area for US soldiers trading in American Army issue supplies.

Cholon is the Chinese influenced area of Saigon.  The name means “Big Market”.  The Thien Hau Pagoda is one of the most imposing of the Chinese pagodas, built in the mid-18th century; it is dedicated to Thien Hau, the Goddess of the Sea.  The local Chinese built it to safeguard the merchants and sailors who crossed the sea regularly between China and Vietnam.

Before leaving this area take the opportunity to take lunch or dinner at one of the many Chinese restaurants tucked away in the alleyways.  They offer terrific value for money.